And So The Stairs Went Up

I had to walk away. The stairs would only ever go up and up and up. The ground is wet beneath my feet from the water that falls from the sea in the sky. If I took a step to the right or left I would catch myself slipping on the moss.

You can see me in your mind's eye. White, rope white hair cut like a box around a pale face. That is me. Blue eyes, or are they just the color of ice?

I breathe out plumes of smoke but you will say that they are just the air that is both too cold and too hot for each other. How does that make more sense than my dreams?

I was born to walk the stairs, to climb climb climb them forever. Don't waste my time talking of why or how I learned to walk by myself. I cannot remember my childhood, perhaps I was never even a baby.

Perhaps I am and have always been.

The ladder is always in front of me. Soft willow wood, with step after step going up and down. I used to dream of a stairway that went sideways. One that I could lay on, even sleep on as I watched the waves in the sky.

Someone once told me there were stars in the sky and that these stars were dying lights. I laughed.

Stars are make-believe, a figment of my imagination. I think I might be a star. Because I am a dying light.

No one told me that because I have never met anyone. I do not even know if others are real. There is only me and the story I scratch into the rock beneath my feet and into the wood of the stairs that go up up up.

When I was little– no that is not the way to say it. Because I have no memory of being little. When I was a being, I made myself shoes. I slipped off the rock in which I had been sitting for such a long time. I got into the water beneath me and took stock of my surroundings. Time passed.

I made myself clothes. Out of moss I made myself shoes and long gloves that reached to my elbows. Silver fishes swam in the water below me, smaller than the ones that swim in the sky, and I killed those and ate the meat and from their scales I made myself a dress to match my hair. Or does my hair match my dress now? I do not know.

I climb stairs. I put hand over hand to go up. I use my feet to help sometimes, though sometimes they seem to just be there. I have never fallen. I do not know what it's like to fall. I have only ever imagined what it would be like to climb so high that I can't see anything below or above me, and then I would let go.

Of course this is all just in my mind. I would never actually do it because how would I be able to tell what happened after? Though I suppose because I don't know what would happen I could just say there's no harm in trying. After all, will I just be climbing forever?

I've often asked myself what it would be like to not know how to climb. What if I had no arms or legs? What if I was just stump and could do nothing but sit on the mossy rock and watch the fish below? Could I move? Could I ever look up to see the water and fish above me?

I ask myself lots of questions as I climb. I ask myself how old I am. What about my face, how can I know what I look like? What if the reflection above and below me lies lies lies?

I ask myself, How could I kill the fish for clothes and food? Why do I prey on those who are smaller than me, but don't dare look closely at the bigger fish? I even ask myself, What is a question? And how do I know anything at all?

When I was younger– but I keep saying this wrong. When I look back into my first memories I used to be afraid of the fishes in the water above. I thought that they would fall on top of me while I was sleeping. Maybe they would smile so wide that I could count their teeth just before they ate me, like I ate the small fish. It would serve me right in the end, if I were to be taken by fish teeth.

But then I ask myself, Would that be my end? What is the end? If I were to say "The End" loudly and clearly, would it just be all ended? I have not tried it for fear of what I do not know.

I don't know how I am afraid of the unknown. Since all is unknown. Who I am. Where I am. Where do the water, and the fishes, and the stairs come come come from. But here I am, and I am fear. I have fear? I am fear? Both seem correct, and someday I will run out of rock and run out of stairs so I cannot trifle on making words perfectly correct.

When I was first exploring, after I killed the fishes and made clothes out of moss and silver scales, I stood for a long time right beneath the stairs. They went up and I could not see where and because of that, I was afraid. For a long time, I did nothing but stay on the rock and eat fishes.

Eventually I grew bored, and I grew bigger as well. By bigger I mean I grew taller. When I grew taller I tricked myself into thinking I could see something just where the stairs met the line of water. Because of this simple trick on my simple brain I decided to finally leave the rock.

Now I know there was nothing to be afraid of. I was silly. There is nothing beyond the stairs, only more stairs. Once you get up to the water in the sky, you wait for the big fishes to pass by. And then very quickly but carefully so as not to slip, you climb up till you get out of the water.

You would think there would be more water, but there isn't. There's less on top then there is on bottom. I was disappointed by that fact. I still am. After the water there is nothing nothing nothing.

I lied. I have lied many times but there's no way for you to know unless I say it. I lied. I lied when I talked about staying on the rock when I was afraid. I did more than eat fishes. In fact, for a long time I did not eat fishes because I was upset with myself. I took one out and tried to play with it, I tried to talk to it but it did not talk back.

I did more than that on the rock. I made another fish out of the moss and this one played with me. I lie again. I made it move and dance and laugh and cry, with my own voice distorted to be higher. I tricked myself into believing that it was its own fish, that had come out of the water because it saw me all alone. But that was not true. No fish would take pity on me because I had eaten their brethren.

I feel better now that I have told the truth. What is truth?

Did you know once I saw a flying fish? Or what I thought was a fish that I have now named Survivor. It was smaller than even the smallest fish in the water below the rock. It was smaller than my hands. It was a color like the water above the stairs, something that can only be described as darker than the darkest blue. And it had these things on its back. They were made of the softest material, softer than moss. It had two of them connected to its back and with them it climbed through the sky without using the ladder.

I later decided it was flying. It is the only word I can think of for its action. I was paralyzed when I saw it. Not with fear, even though I did not know it. It was too beautiful for fear. I loved Survivor. I watched it fly down to meet me, it kissed me on the nose, a gift I could not return, and then it flew away back through the water in the sky until I could no longer see it. And since then I have not seen one like it. I fear it was the only one.

When I think of the nothing, then I wish I could let go and see what happens. Anything would be better than nothing. If anything could get between nothing that is.

I was afraid. I didn't know what it was going to do to me. When it touched my nose, I grabbed it with my gloved hands and threw it on the ground. It seemed stunned by hitting the rock but but but then it got up again and fluttered its wings. Now I was afraid that I had made it mad at me.

So then I crushed it with my foot. I heard it crunch under me. I felt it grow small and wiggle and then finally not move at all. Then I picked up my foot and I knelt down and looked at it. It did not move and I did not move either. But then my fear was gone and I was curious. What was on its back? How did it move without climbing the stairs? And I picked it up. Then I tore it apart.

I looked at every part of it. I took its wings apart to small pieces and looked at them. I tried to eat them but they turned to dust in my mouth. Then I took apart it's body. With my nails I cut it open and looked inside but it was so small. I tasted its body but it tasted bitter and I spat it out and had to drink some water from below the rock. When I was done I threw the pieces in the water below the rock and the fish ate the rest.

I fear it was the only one of its kind. 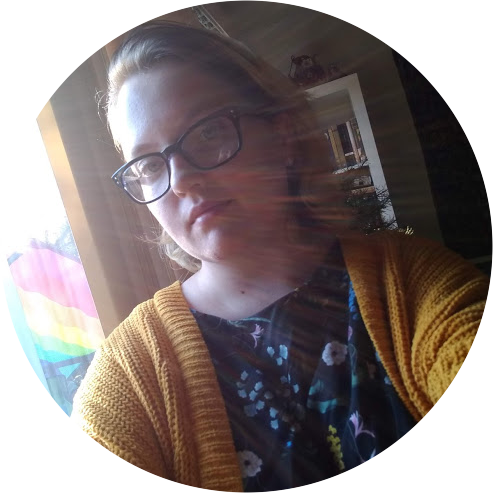 Abigail Pearson (She/They) is a 24-year-old queer writer of novels and poetry. Most recently she has published a poetry collection titled Maybe (Not) Her, which explores themes of bisexuality and polyamory. Other work by Abigail has been published Pussy Magazine and Moonchild Magazine. You can find them on twitter [@whimsywriter3](https://twitter.com/whimsywriter3).