marriage not worth price of admission

When we first meet the two protagonists in the appropriately titled The Marriage of the Theatre Critic to his Wife, they are grunting through an orgasm in a dreary studio apartment. We aren't quite certain whose orgasm it is, but it hardly matters; this orgasm, like all the ones in their marriage, is completely fake. This is not the only moment of superb acting in the thirteen-year union, which opened to rave reviews at the Palace of Justice in January 1995. Their performances are so adept that at times the couple even mange to fool themselves.

The Theatre Critic (played by himself) and his wife (the beautiful Stephanie Walsh) were never sweethearts. They were academics: he, a student of theatrical history; she, a grad student studying depictions of Joan of Arc in 20th century literature. Even then, the Theatre Critic was a Theatre Critic and the Wife was a Wife. He was writing reviews of community theatre while she was trying to remember why she had married her American History professor. All this changes one evening at the library: both reach for Shaw's Saint Joan at the same time and the rest, as they say, is tragedy.

The American History teacher (a memorable cameo by Charles Shelley) tries to fight for his wife's heart, but it is no contest. The Theatre Critic, with the dialogue from several hundred years of theatre at his disposal, easily trounces the Professor, whose best weapon is a love letter John Adams once wrote to his wife. By the end of the first act, we are so enchanted by the romance that we believe we are headed for a happy end. Such optimism is, of course, a fool's dream. As Othello, Romeo, or Oedipus Rex can attest, any marriage that happens before Act III rarely survives until the curtain call.

Trouble begins as soon as the Theatre Critic runs out of plays to quote and must start speaking for himself. Only then does it become clear this will never be anything more than a transitory love. They are homebodies whose chief social excursions are opening nights. They will go to the theatre throughout their thirteen years of marriage and in all that time, they will only agree on one show, a revival of Saint Joan. (Both hate it.)

The Theatre Critic does an impressive job portraying the oppressive intellect with an opinion on everything (theatre, politics, weather, cheese). He does not drink, cheat, or snore but is so relentlessly drab that he often tries just for the excitement. Ultimately this makes his character inconsistent, as if he is unable to decide whether he wants to be complex, damaged, sincere, lovestruck, or merely an intellectual bore.

Although Ms. Walsh has a fine time with her scathing portrayal of a woman who is unable to sneeze anywhere but in private, she spends most of the marriage making jokes while she waits for someone to tell her what to do. Without direction, she attempts to introduce a son into the proceedings, but this does little to help. Played by the precocious and adorable Mackenzie Bates-Walsh, the boy proves little more than another thing for his parents to use as ammunition.

By the halfway point, we have arrived at the sort of tensions reminiscent of Albee's Who's Afraid of Virginia Woolf? In rambling monologues to their individual therapists, we learn there are nights the Wife lies so still her husband suspects she no longer has a pulse, and there are times his critiques are so cruel, she is certain he no longer has a heart.

Like all marriages, this one is written by the participants, and in this respect both must be commended. The entire marriage floats by on witty banter, although the Theatre Critic clearly prefers to have the best lines while his Wife always wants the last word. But everyone who worked behind the scenes seems to have also chosen anonymity, including the unnamed costume designer who cleverly decided that the lovers' clothes should reflect the state of their relations. In the beginning, they are so color coded that the Wife's earrings match the Theatre Critic's socks, but as the thirteen-year marriage proceeds, this cohesion subtly begins to slip. By the fifth act, the colors clash until, like the couple, not even their buttons seem able to agree.

The actors chose to direct themselves, an unfortunate decision that leaves them floundering with an assortment of obnoxious supporting players: parents who meddle, friends who judge, and a son who proves so relentlessly innocent that it seems a mortal sin to damage him in any way. The Theatre Critic, buoyant from the optimism of several hundred plays (most of them musicals) believes that they merely have to recall the moment of that first, hungry passion when they reached for Saint Joan. But he has become intolerable to his Wife, who sees in his reviews a man who will pick at any visible scab in order to draw blood. She accepts the theory that love is fleeting and that entropy affects all systems, even marriage (especially marriage). Ennui triumphs over love and like all those plays with weddings before Act III, the curtain is brought down by the lovers themselves.

It is thankful the marriage ends when it does, for by then, it is no longer worth the price of admission. We are not given a definitive finale, but a nod must be given to the simple and majestic ending that avoids all sentimentality. In their last scene together, the Wife is found watching her husband prepare for yet another opening night. "I think you'd better do this one alone," she says, and it is in this moment that their marriage finally ends. The rest is just paperwork.


Notes from the Author
As someone who has worked for years in the theatre, I've dealt with both my share of theatre reviews and my share of relationships with theatre artists. Using one as a way of reflecting on the other seemed like a fun writing exercise but the style also became a way to reflect on the relationship through the distancing that happens when one is outside a situation. Relationships always look different when you're on the outside looking in, and I tried to capture what it would be like to watch this marriage unfold without actually being inside it. 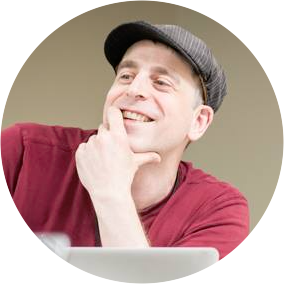 Joel Fishbane writes fiction, non-fiction, plays, and screenplays. His novel The Thunder of Giants is available from St. Martin's Press. Find more of his work at joelfishbane.net.