They were on a dirt road travelling south. Rick was driving fast, and the RV kicked up whole atmospheres of dust behind them. Susie had no idea where they were going, but she supposed he knew. They had picked up everything they owned, dumped it in the RV and left the house behind. They never did own much, now even less, now almost nothing. Her clothes, his clothes, some cash, not a lot, enough for a few weeks. And the old RV, ancient now, his father's once.

Fact is, they left the house because they lost the house, ran behind on payments, chasing after the mortgage for months on end and then not making the payments, sometimes not even getting close, and some months nearly there, borrowing from hell's own loan sharks, and her father, and racking up substantial sums of debt on the credit cards, taking from one, paying off another, paying down the interest, using that card to pay off the mortgage until and up to the day when the game was up and Rick couldn't do it anymore, Rick's job at the store gone, Susie flunked out every night from two jobs, waitressing at Denny's and shifts at Dollarama, and he could see it was killing her, it was no good, they weren't making it, they weren't going to make it not in any fool's blind imagination, as Rick said, those were his words.

Clear up ahead, he said, glancing over.

She was staring out the window, no expression, none that he could decipher anyway. She'd turned off the radio several minutes ago, so he thought she might have something to say. He was right.

Slow down. You're going too fast.

Just trying to get there, that's all.

We'll know when we see it.

See what? she said.

Trailer park, nice river bank with trees, or a lakeside spot we can park at for a few days.

'We'll see' isn't going to get us anywhere.

And where is the anywhere you're thinking of especially? he said.

Susie fell silent. No answer, not even an attempt at an answer or any kind of scolding or rebuke. She was too flunked out, he thought, too tired to even care. They drove and drove on this dirt road, Susie clenching the map, checking it from time to time, but this road wasn't marked, or she couldn't find it if it was. It seemed to go on forever. Fields beside were dried up, some burnt out, nothing growing. Some tire marks in places. Thin bands of dust blew out across the stubble, settled, and then billowed into clouds that swept over the dirt road, picking up more dust and blinding everything.

Then the road became just a path and ended. Just like that. At the end of it was an empty field, cropped low or never grown, just dry sticks. Rick slowed to a stop. They both got out, stretched and looked around. Now what? Now what? No trees or anything, just this field. And then Rick spotted some kind of a structure over to the right, some distance away. Hard to tell what it was.

Look, was all he said, and they began to walk over there. Susie stopped, went back, got a bottle of water out of the RV, drank, offered it to Rick. Rick drank, and they both set off over the dried grass, the hard earth, the sun beating down, blazing murder on their heads, hard to see, even.

Rick was hopeful as they walked.

Could be here, he said.

What could be here?

Where we stay. Over there in that cabin or whatever it is. Likely no one there. We can rebuild. Homestead. Homesteaders. Like the old pioneers. Whaddya say, Suze? Up for it? Begin again?

He looked across at her, but she had nothing to say, so he went on, hoping to boost her up, hoping to find that bright, lit-up Suzie he met once who was so keen, so eager for life and for a life with him, and they had planned it all out correctly in the way that they were told they should, and none of it, none of it had worked.

And we could grow tomatoes maybe, and catch stuff, he said. And I can build or rebuild whatever needs to be rebuilt, I'm handy, I could do it. Flowers could work in the front of the cabin, flowers and a few bushes or what have you, Suze, you like the little yellow ones that come out in the Spring, what are they called?

That's it. Forsythia. And who's Sythia I would wonder.

She smiled. They walked on. He took her hand. He thought his head might split with the heat axing down through it. She felt hers cracking like an eggshell. In the city before they left, there were foolish kids frying eggs on the tarmac. It took ten minutes, but they were cooked right through, hard yolks and all. Then they fried bacon on the hoods of cars, simmered beans in hub caps. It was a foolish thing, impressed nobody, least of all her. Kids were always foolish, she thought, that's the problem with them, they don't even see the seriousness of it and it's them too who will have to live with the seriousness of it. Shit for brains. The neighbor's kids. She lost the track, wandered off to the right, he took her hand again redirecting her back to the path—not that there was a path, really, but there was at least an end in sight.

They walked, and as they walked the structure they were headed for began to reveal itself to them, and it was up for no good, this structure because it was not more than a heap of burnt-out logs with some of the blackened posts still standing, like it had been a home once but was not anymore now because someone had torched it, had despaired and torched it, or had despaired and drunk to all forgetting and maybe dropped a burning cigarette down the backside of a sofa and torched it and incinerated themselves and anyone else in the cabin too. Possibly a whole family had been charred to ashes here. And all that was left was a higgledy-piggledy pile of old burnt-out logs, and where the kitchen may once have been, some shards of china and glass, a big iron frying pan, and a sink—a kitchen sink (ha ha)—the "everything but" being the "nothing but" here.

And for some unknowable reason Rick and Susie, still hand in hand, stepped inside this ruin, if there was an inside, which there wasn't really. They just stepped from dirt to dirt and from dried grass to dried grass. But they knew they were in it when they were there. Because they felt a heaviness take hold of them as they stood there, like the weary sigh of the earth, or like it was the absence of those dwellers who fled or were burnt to ashes from despair, or who maybe drank themselves to their own death. They could feel the blight of it in their own hearts, and they stood silent, like in prayer, but they weren't praying, and they weren't thinking anything.

Then Susie stooped and picked up a log she was standing beside. As she lifted it, the half of it crumbled to black ash. And she dropped the other piece of it, which sent up a cloud of ash when it landed, thud on the ground in front of them. There was nothing underneath that log, where it had lain was just more ash, and more dirt under that. It was easy enough to see that there was nothing there.

Not much here, Rick said.

Susie looked at him, a hard question in her eye, he knew it, but couldn't help saying anyway: Maybe we owe it to them, to rebuild.

Susie went quiet again, just stood there, her head hanging, so he let it rest for a moment, then he said, We could stay for a while.

Susie nodded. They stood there and looked around for shade. None though, that they could see. 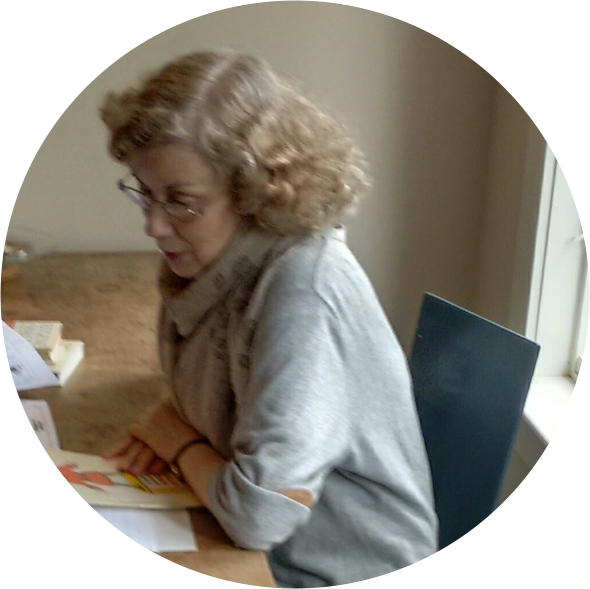 Rosalind lives in Toronto and has written for radio and theatre. Her short stories have appeared in magazines in Canada, the UK and the US, including Litro UK, Popshot, Filling Station, Flash Fiction Magazine and Burningword Journal.