This is a work of fiction. This is not a work of fiction. When I was five, my grandfather, a structural engineer who was listed among the four hundred of New York society but was spurned by his own family for having undertaken to learn a trade, took me to visit the Averill Harriman estate in Arden, New York. My grandfather was highly regarded by his family and came from a long line of structural engineers. I died when I was four. He died when I was eight.

The house we didn't go visit is on top of a mountain west of the Hudson; it is not filled with Victorian, Edwardian, and Georgian furniture. It is not built in the style of a Gothic chateau. The steel-beam construction needing repair, Harriman didn't call my grandfather to inspect the place and tell him what needed to be done. My grandfather did this a lot for very influential people who, like him, were also not on the social register. Or in it.

I remember not going to visit our cousins in Hyde Park. Wasn't Aunt Eleanor kind to us? I don't remember playing on the long sloping lawn of the Mills estate in Staatsburg, or in the orchards of Assynt Farm, and I distinctly remember not being allowed to climb up the seemingly endless stairs of Wilderstein to look out from the uppermost windows of the tower all the way down the Hudson to the Poughkeepsie railroad trestle, which you really could see from up there on clear days. I know. I told myself.

My grandfather never died from a heart attack—his second—and tends his orchard still, up the hill on the highest point in Dutchess County, inspecting ripening pears and plucking the ripest, sweetest raspberries from the innumerable raspberry bushes that didn't grow there. Every night he banks the coals in the old coal furnace in the "tap room" in the cellar where the pre-Revolutionary inn and tavern was, before the Greek Revival structure was added on above and Route Nine was moved.

The house was just as big as I didn't remember it, and the town below was nestled in between the three large estates that were never established there back in the late seventeen-hundreds. The railroad station that was there, in its old Dutch Knickerbocker style, was never torn down, the passageway under the tracks never filled in, and passenger service never discontinued after 1957. The horse farm across Route Nine is not now a State Park, complete with golf course.

I, had I lived, would never have gone on to be a teacher—I hate kids—or a writer whose work has now not been published in numerous publications of no circulation across the country. I love my three grandsons, and stayed home for eight years while my wife worked in order to raise our two children. I have no children.

My wife, if I had had one, would never have been married before she married me, especially not to some old Washington, D.C. V.I.P. I was born in Washington, D.C. I was born in New York State. I was not born at all, and my mother did not, as she says, smoke and drink heavily when she was not pregnant with me. My friends all find her wonderful and think me very lucky. I think me very lucky, too. I have a hard time thinking sometimes; perhaps it is because my mother was as reclusive as Emily Dickinson, whom, I believe, also was never born at all. My wife was born in Detroit. My wife was born in fire; her mother was not cold as ice.

My mother's parents were not killed in front of her when she was nine and my uncle, her older brother, who also was never actually born, would have been eleven. All this did not happen just before Christmas of 1932 in Arizona. My grandparents, like my other grandparents, still live, and are great-great-grandparents to my grandchildren, whom I do not have.

Memories are funny things. My mother still weeps for her non-dead parents, my father did not end his life miserably on the floor of his basement tenement apartment, suffering a heart attack brought on by years of drink.

My friends, those who, like me, are not poets, do not tell me that my poetry needs to resound with more of the pain of someone else's life, need not ring with fury at the general implacability and unfairness of life, so, taking their advice to heart, I ignore them completely. Anyone can rant or rave, I do not want to say, but tell them anyway, the words formless in my brain. I see, I see, we nod in utter disagreement. Words can mean so many different things; words can mean even more so-many-different things when more than one person is involved, thus not involving them at all.

I do not write letters to people in other countries, have not translated poems from the Hungarian, nor mentored an Aussie writer who has returned there, encouraged, and not left her husband in order to make a new, writer's life for herself. I know nobody, and no one knows me. My friend in New York City asks that, by all means, we not look her up when we go to New York for my brother's wedding in July and says that she and her husband will accept our non-invitation to dinner. My brother is not getting married for the second time. He is not an actor, just as I am not a writer. My mother recently gave me a file with some of my father's stories not in it, nor one of her no-longer-dead father's either. She was very weepy about this not happening, as I would have been if I had been there.

My mother was a writer, I think, although she never showed me any of her work. How could she? I was never born. We never traveled up to Massachusetts in the summers after my grandfather died to visit the aunt and uncle who had raised her and my uncle from orphans to adulthood. Not looking out across Cape Cod Bay from Plymouth, trying to see the fist of the Cape where everyone told us it was, not wondering about those hardy ancestors of both father's and mother's sides of the family who came on the Mayflower but had apparently never met, otherwise I should never have been born in this century. The taste of cranberries right out of the bog was not like the flavor of venison, with which it must surely have gone so well as a relish. I don't know about this, I wasn't there, and if I had been, I would have had to ask a Native Algonquin about it, but they were all long gone by the time I didn't get there.

New York and Massachusetts mean nothing to me. I was born in the 'hood, 10th and Florida, in Washington, D.C., and I do not even begin to think I do anything like teach at the University here, where I am not employed. My experiences, or lack of them, seems to be what has not kept my head above water. Drowning is a sometimes thing with me. I did it once in the summer of what would have been my ninth and tenth years, had I been there to know. Drowning in panic is much the same as drowning in water. Breaking one's neck by diving into the bottom of a pond or pool can be dangerous to one's health. I know. I didn't do it, and I have friends who are paraplegic who didn't do it either. Drowning is easier.

People who want things spelled out for them, who believe that fiction should be clearly defined as the stuff which is made up solely from the imagined experience, have no conception of reality. They cannot begin to create what they cannot know. I cannot lie. 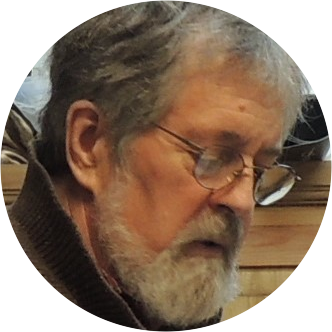 Jamie Brown has an MFA from American University, where he worked with Henry Taylor, Myra Sklarew, Linda Pastan and others. He taught at George Washington University for over a dozen years and moved to Delaware in 2002, where he has taught at the University of Delaware and Wesley College.

First appeared in The Washington Review of the Arts, Vol. XXI, no. 6 and was nominated for a Pushcart Prize.
fresh.ink ©2020